Our practice focuses exclusively on special education issues. We provide our clients with the personal attention and the professional effort they deserve.

The Law Offices of Charles P. Fox has provided representation, advice and guidance in special education law since 1994 for clients throughout Illinois.

Our Mission:
Our mission is to vigorously represent students with special needs in all facets of special education law through advocacy, negotiation and litigation to allow our clients to accomplish their educational goals. 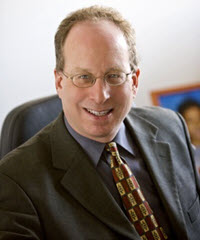 When Charlie set his sights on becoming a lawyer, he never envisioned himself as a specialist in education law, supporting the needs and rights of children and young adults. But, as a veteran special education attorney, Fox has found his path with the beacon light of his son Cole, now 19, guiding the way.

The “catalyst and defining principle” for Fox when he entered special needs law was his then two-year-old son, who is diagnosed with Cerebral Palsy who needed an advocate. Now considered “my hero” by Cole, Fox works to assure that his son and other children with special needs receive an appropriate public education.

Fox debuted his blog in 2006, with this site covering a spectrum of issues facing special needs students and their families — from personal commentary on failures of the system and latest research findings to humorous contributions by his wife, children’s book author Lori Miller Fox.

Fox has honed his writing skills through drafting of legal briefs, as an editor of the IIT Chicago Kent College Law Review and working as a judicial clerk for an Appellate Court Judge after law school for two years. He is a member of both the U.S. District Court for the Northern District of Illinois trial bar and of the bar for the 7th Circuit Court of Appeals.

In addition to his daily law practice, Fox was an adjunct professor at DePaul University Law School (2009), with a supervisory role (2009) in the newly created Special Education Law Clinic, which opened in August 2008.

Julie is an attorney with nearly two decades of child advocacy experience. She represents children with disabilities and their families in achieving appropriate educational services, including IEP meetings, eligibility conferences, mediations, resolution sessions, manifestation conferences and due process hearings. She also works with families with DCFS involvement.

Julie previously worked at the office of the Public Guardian as a senior attorney, Association House Legal Services and First Defense Legal Aid. She is a graduate of Loyola University Chicago School of Law and a member of the trial bar of the Northern District of Illinois.